Showing posts from February, 2019
Show All

The Memento Mori Graves of Barthomley 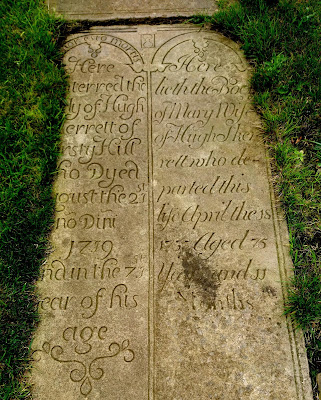 by Charles E S Fairey & Michael ‘Jarl’ Oakes, February 2018 (Artwork by Michael ‘Jarl’ Oakes) Grave Locations Direction: Churchyard: From South of Tower to East of Chancel. At St Bertoline's Church in the picturesque South Cheshire village of Barthomley, there are a number of Memento Mori graves. Memento Mori is imagery or text which reminds us all, that we shall die, so prepare for Death, in our lifetime. The following six gravestones depict symbols of death, and one even has a Memento Mori poem inscribed upon it. The graves are described and the inscriptions stated, along with the interpretation of the symbols below. Grave 1 Ledger Gravestone Central Image:   Hourglass (symbol of mortality, representing the passage of time) Left Side Inscription:  “memor esto mortis” Latin: Translation: “be mindful of death” “Here / interred the / Body of Hugh / Skerrett of / Gorsty Hill / who Dyed / August the 21st / Anno Dini / 1719 / And in the 71s
Post a Comment
Read more 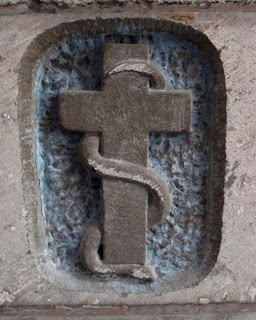 Hidden Numerology and The Perfect Prime St Michael’s Church in Garway, Herefordshire, was originally a Knights Templar Chapel with a defensive tower and preceptory. It was later taken over by the Knights Hospitaller who removed most of the circular Templar Nave and replaced it with a rectangular nave. However the Chancel and the ornately decorated Templar Chancel arch remained, with its own unique horned green man carving, to its left hand pillar capital. The Hospitallers also built a dovecote behind the preceptory, which was reputed to have 666 dove holes, before another doorway was inserted. The church hosts many odd and interesting symbols, many of which are linked to the Knights Templar, the Knights Hospitaller or the Freemasons. It is thought that the church site and Templar Complex was chosen due to the pre existing spring, which is still situated to the north-east of the church, dedicated to Saint Michael. As well as the many carved symbols existing inside and outside, the
Post a Comment
Read more